skip to main | skip to sidebar

We decided to make a little detour on our way home because we didn't know how much longer we would be living in the mid-west and there are things to see!! We spent an extra night and day in Independence, MO. We first went out to Adam-ondi-Ahman. It is a beautiful valley and that pretty much it. But it was nice to see it in person and to learn more about what has been prophesied about that spot.

We then made our way to Far West. For a time this was a quaint busy community for the Mormons until they were forced out of Missouri. They were told to build a temple but only got the four cornerstones in place before they were run out. Someday that temple will be built though.

Here at Far West there was a drinking fountain that this frog came out of the drain, while Samantha was taking a drink. Ryan was being brave by touching it and then Samantha really wanted to take a video, while I touch it. So, I was giving her a lecture on not jumping when the frog jumps after I touch it because I didn't want her to drop the camera...I ended up being the one that was not so brave when it jumped and landed on my arm (see video at the bottom of this post).

We then stopped by to see the progression of the temple being built in Indepence. It is beautiful. We are so blessed to have so many temples on the earth today. What a wonderful blessing to be able to go to the temple, make covenants with the Lord and to have your family sealed to you for all eternities!

After this, we went to Liberty Jail. What an amazing place. It has been rebuilt in the exact spot that the original Jail was, and has been recreated as an exact replica as the jail. It shows Joseph Smith and the four other men who were imprisoned there and shows the circumstances that they had to endure. I learned a lot and am so grateful for Joseph Smiths courage and Faith to continue on doing what the Lord asked him to do, so that we can have the gospel today. That is such an incredible blessling.
Our last stop before heading home was at the visitors center in Independence. There we learned more about our church and our history. The kids loved the vidoes about the prophets, what the pioneers went through to, how we got the Book of Mormon, and all about the importance of families. I love my family and am so blessed to have them for all time and eternity. I couldn't ask for more.

Posted by Jackie at 4:09 PM No comments:

Our Return Trip Home...part one (In Utah)

More birthday celebrations!! This time we got to combine it with my moms birthday which is right in between Sam and Spencers. This time I made an ice cream cake which turned out to be really yummy!!

My kids and my brothers three kids (Miles, Kyle and Layla)

This was an attempt by Sam and Evan to stay up later...it worked of course. They got to watch the stars for a while because cousins who never get to see each other shouldn't have to go to bed TOO early...

Spencer is ONE!!! I can't believe how fast this year went by! We were still in Utah so we decided to have yet another party! We went swimming at Aunt Angie's pool and the kids (again) had a great time!

These two beautiful girls are two of my favorite people in the world. They are amazing!! I feel so grateful to call them my sisters and best friends. We are not all three together very often but when we are you can count on a good time. I love them and admire them both SO much. I just hope someday I can be as beautiful, smart, loving and wonderful as them!! It would be nice to be as skinny as them someday too! :-)

More cake and ice cream anyone?! Why not?!

I love my family with all my heart. That means my family and my side and my husbands. I feel very blessed to to belong to such amazing families and to call them mine. I love you all!

Posted by Jackie at 2:36 PM No comments:

These pictures were taken 4 years ago when we were visiting Grandma Lee in Oregon (also for Cameo's wedding). We are so grateful we were able to see her then and many more times after that when we lived in Oregon. Grandma Lee passed away in September and we will all miss her greatly. My children loved her and so do we. She lived a great life and we were blessed to call her Grandma!

We were able to go to Oregon for the funeral to celebrate her life. What a blessing. It was a wonderful trip and we created many family memories.

We were able to stay with our friends in Eugene for a night. We miss them so much! Maybe someday we will get back to Oregon. That would be nice!

Almost all of the family was able to come for the funeral. It was so fun to see all the cousins together and having a blast! This was taken at like 7 or 8 am when all the adults were still trying to sleep, but the kids were awake...so Uncle Rich took them outside and gave them candy...of course!

We were there for Samantha's birthday which was really fun! We spent the afternoon at the splash park and the kids had a blast! I can't believe my baby girl is 7 years old!! Seriously? How did that happen?!?!

Spencer was a little shocked about getting so wet

Spencer's birthday was a couple days later, but we were leaving the next morning so we just celebrated them together. I can't believe my baby Boy is 1!!!

Both Sam and Spencer are such joys to have in our family. They are both very different but have brought so much happiness into our family. We love you both so much!

Grandpa reading "Hegedy Peg", a book that Grandpa loves and the children always love him to read it to them. 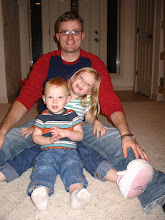 Daddy time. The kids have so much fun playing with their dad and one of my favorite things to do is just sit back and watch, and listen to the laughter.

Jackie
I am a wife and mother of THREE amazing children. We are a happy family and I can't imagine my life without them.